I competed in my first bodybuilding show back in the spring of 2004, 15 years ago! Man, time flies… It began as a challenge to myself but like all things, if you aren’t careful, a healthy pursuit can quickly become something else and take on a life of its own. I matured in later contests and realized that it was the process, the journey, that is what it was all really about. I was never cut out to be a ‘bodybuilder’, it was just something I did. But like you, I struggled wit

I Don’t Care if It Looks Good on Paper…

Throughout the years, I’ve been pleasantly surprised by how many fake experts I’ve run into. People that simply repeat fitness industry dogma. People that can tell you the science and write out the perfect program on paper…. But…. It doesn’t matter if it’s the perfect program on paper because the perfect prorgram for you is the one you can stick to. That is why we place such an emphasis on Mind Map and the science of habit formation. We will be the first ones to tell you that 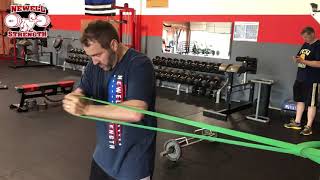 Member Showcase: The Legend of Lombo

Mike began training with us a few years ago after his sister Nina roped him in. My brothers and I have known Mike for a damn long time so it was good to have him come on board. Mike has made a complete physical transformation, but more importantly is the mental resilience and emotional muscle that he has built. He went through a very tough time last year with the passing of his father and just 6 weeks ago, his twin boys, Ashton and Taven, were born 2 months prematurely. Yet,

In case you didn’t know, I am super passionate and fascinated about fasting. If it’s something you’re remotely or deeply interested in, then take a listen to today’s episode of Unlocking Your Inner Strength: www.newellstrength.com/single-post/2019/06/24/Amazing-Benefits-of-Fasting Think differently - Kyle Newell P.S-Whenever you're ready here are 3 more ways we can help you transform your life, lose weight and gain bundles of energy! 1- Check out this podcast I did on Resista